Google Earth is without doubt Google’s best products, forget finding out what’s my local take away, forget rapid transit around a city – I want to look at my house in amazing resolution and wander around the Californian Desert looking for faults!
Possibly the most powerful thing about the program is its ability to easily incorporate third-party data onto the projection of earth, most of this information is free, and files are fast to download. Many a fieldtrip I have been on with the University has utilised the software to provide a image to demonstrate the presence of a fault or particular bed - I even used Google earth to find faults in my dissertation mapping area that had eluded me in the field (to be fair, they were cutting schist). Information extra to the program is downloaded to the user by a small (since the data is then streamed from the web) file termed a ‘kml’.
The BGS have released all of the UK’s geology (At a fair resolution) as a kml file, and although it makes the program run bit slowly (best to zoom in, find an area then turn it on). It’s a great resource, and given that in a previous post I highlighted the importance of maps in interesting people to the geosciences the availability of free, exciting maps presented in a naturally pleasant manner on a simple to use – but powerful program is brilliant.


The USGS, however are not left behind; they have released an earthquake locator kml file; which also gives the locations and movement of worldwide tectonic plates. Alongside, mainly Californian resources into tectonics. http://earthquake.usgs.gov/learn/kml.php - With supporting material provided. Recent events in the far east, have highlighted the importance of an understanding of tectonics and downloading that particular kml file really highlights the incredible activity that has resulted in such devastation to a sizeable area of Japan.


Given that the program is provided by Google you would expect easy integration with resources online; Websites (or lecturers) can provide a .kml file for download to show a certain feature (glacier, mountain, fault, volcano etc...). While the program itself features further third party features, such as images of natural wonder (and animal migrating) or a factor of human life being put under threat (such as global warming). What is missing though, considering that seeing something in the field is a lot better than in a textbook, is geological field localities; people could virtually visit Hutton’s unconformity to learn about geological time, or explore the Barrovian district of Scotland to learn about metamorphism. These resources may be specialised but similar ones exist for biosciences and conservation; why not geology? The perfect science for Google Earth.

That would be an Ecumenical Matter

The premise of the video is one of trying not to get the old drunk guy to offend the bishop by insulting him in some manner,
This leads me to the question, with some links to the video; should religious groups have any involvement in science policy (particularly geosciences) . Now before I get started I really ought to point out that I have no religious faith and find blind faith in invisible friends a poor utilisation of 4 billion years of evolution. I will try to be balanced, but there is no guarantee.
So science is based on imperative evidence, deducing theories and testing them against observations. Then discussing these observations and theories within the larger framework of science to produce what can, after a substantial body of work be termed as ‘fact’. Religion is not, it is based on stories written millennia ago. Now it’s important to consider what religion has given science, Islam essentially produced modern astronomy, while Universities funded via Religious organisations have allowed leaps within science in both modern and ancient times.  In today’s science dominated and driven society though, there is little place for the word of an invisible lord.
Stem Cells are very possibly the most exciting area of medical research now, a simple view of news sites shows what opportunities this technique can give the world. With Heart Disease to Skin Replacement under the radar of Stem Cells, this is a beneficial technique to mankind. Ethical questions are aroused, via the creation of an embryos life to produce the necessary cells, but this is an Embryo, it has no real brain, nothing tangible that is a ‘life’.  Moral objection against such a beneficial treatment could be founded on perhaps a moral superiority, but let’s remind ourselves that Christianity doesn’t value all life as equal:
`As for your male and female slaves whom you may have--you may acquire male and female slaves from the pagan nations that are around you.’ Leviticus 25:44- New American Standard Version (1995).
Plenty of Christians in argument to this little passage will instantly respond ‘It’s the Old Testament, so therefore it doesn’t count’ or something to that manner. Well, that’s handy since one of the big problems with Science and Religion seems to be right at the very beginning.  Yes, it’s time to get the shoe horn out, since for Geology we need to look for some Answers in Genesis.
Most geologists know the idea of creationism; essentially that the ‘mainstream’ scientific theories about the formation of the earth and associated life are incorrect and the story of genesis, as portrayed within the Bible is correct. Evolution is simply a ‘theory’ as is plate tectonics. This would be fine if it wasn’t for the widespread belief of this within the American (and other areas of the Globe). There are some frightening statistics; 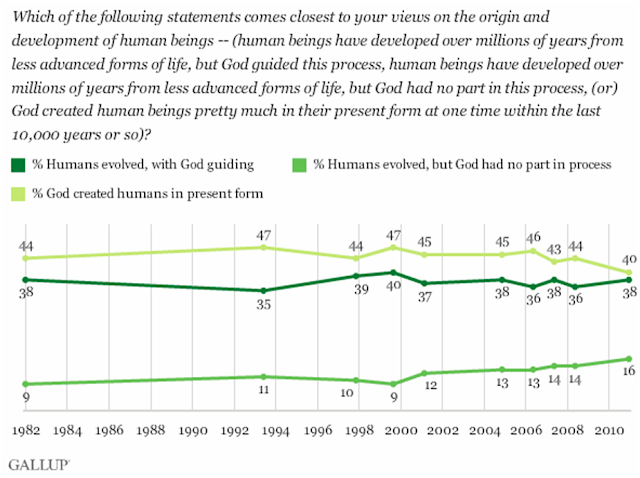 Essentially only 16% of the American Population ‘believe’ that humans evolved. Thankfully the seven day creationist view is down (presumably because there is an increase in ‘intelligent design’). It would be tempting to apply this disbelief in evolution as to ignorance about the existence of the process. However further stats prove otherwise:
How familiar would you say you are with each of the following explanations about the origin and development of life on earth -- very familiar, somewhat familiar, not too familiar, or not at all familiar? How about -- [RANDOM ORDER]?
Despite the familiarity with evolution (45% and 37%), ‘belief’ in it is only sits at 16% (or 13% when the table above was produced), meanwhile creationist has a similar idea (presumably due to the integral links with the ‘theory’ and Christianity).
The question is then, why is there such a familiarity with evolution but such a low ‘uptake’? Is it that people have made a decision to not accept evolution based on the evidence – or simply their faith is o great to allow science to erode it.
Therefore how does mainstream (or secular) geology act in the face of theistic interpretations about the worlds’ and life’s’ origins?
Looking at the USGS’s tagline: ‘Science for a changing world’. There is a strong implication that evolution would be present, and given that Darwin’s, Wegners and others principles are integral to comprehending the geological record there should be a fair amount in support of the theory. Not so, searches for ‘evolution man’ and ‘evolution fossil’ returned no results describing the process. Creationism was barely represented; quite rightly. It seems very odd that the geological survey, the public body which gives such exceptional resources for tectonics and seismology does not seem to promote evolution. The theory is taught in (most) American schools but resources are lacking from the government body which has such a great opportunity to provide exciting and stimulating resources into evolution.  The British Geological Survey Follows a similar pattern
NHM: The Natural history Museum; is funded primarily from Government sources, both for research and outreach. It is staunchly non-thiestic. From ‘The Darwin Centre’ and plenty of resources on Evolution, there is no provision for creationism; with searches into it revealing purely scientific material. Is this beneficia? A comparison of the two theories would allow a large proportion of the non-evolutionary believing population to grasp the theory and improve their knowledge, simply discounting something that is fundamental to a large group of people’s beliefs is only going to alienate them; potentially not allowing a full comprehension of evolution.
Geological Society of America.
A clear statement on evolution ‘The Geological Society of America strongly supports teaching evolution and the directly related concept of deep time as part of science curricula. GSA opposes teaching creationism alongside evolution in any science classroom’. Although vocal in its opposition the GSA takes an admirable line, it gives sites for both theories, which allows people to make up their own mind – but with an esteemed and world renowned organisations view in tow. The site provides a wealth of fairly neutral resources, including an interesting debate of both: http://www.geosociety.org/criticalissues/ev_shermer.htm. It is then, a pity that organisations with more prominence (the USGS and NHM) take such polar lines in discussing the controversy surrounding our existence.
Finally; Conservapedia
If you think you’ve seen some rubbish on Wikipedia, well you haven’t seen anything yet. Conservapeida is a ‘wiki’ based on a right wing viewpoints. Having been banned from it hundreds of time (one time for having a ‘provocative’ name featuring the word ‘geology) I can without doubt say that modern, progressive, peer reviewed geology has no place there; evolution is poorly represented and creationism held as truth. It’s a lost cause and an appalling example of geosciences communication.
So, in conclusion. Where can geosciences communication place itself on the creation/evolution debate? Should it sit on the fence and take both into account before promoting the more accepted, peer reviewed theory? Or should it ignore all creationism and not give it the time of day – simply ignoring a theistical interpretation of our earth’s origins? Although I have no faith, I feel that it would be foolish to ignore many people’s beliefs, it is better to co-operate, give people a reference point from where they can learn more but in a more pleasant manner than simply steamrolling over long held beliefs
Posted by Jack at 15:49 No comments: