Everyone loves a good film/movie (or a not so good film), but how good a job do films do in communicating geosciences?
The Core
Well known for being incrediblely inaccurate the 2003 film The Core centres on a group of hardened explorers (sorry terranauts) sent to restart the cores rotation. Which has ceased is causing all sorts of awful goings on involving microwaves and pigeons dropping dead... even the Golden Gate Bridge is affected (never mind the San Andreas – it’s the ‘waves’ that get it!).  A space shuttle even lands in Los Angeles – this has all the ingredients of a great action film.  Naturally the American’s are all over the saving of the world, despite the Russian’s digging the deepest hole on earth, the Italians going the deepest in the ocean (Trieste in the Marians trench) and the South African’s having the deepest mines. Although those three are based in reality.
The aforementioned terranauts head, without too much discomfort to the core descending via the Marianas trench (which opens during a quake despite being part of a subduction zone), into what looks like a lava tube – complete with an explosion despite there being no oxygen. Eventually after massacring some more of the mantle they get to the core and using nuclear bombs to get the thing rotating again and save the world.


In the process they explore a cave full of quartz (which should really be a little further up, having crystallised) 800km down and although its a bit toasty – there isn’t too much pressure. Besides getting through the solid (due to the pressure) Iron/Nickel core is pretty simple too. The film may well be entertaining; but the idea that the mantle can be drilled through is utter nonsense – what’s concerning is that plenty of people do not read about the earth, their knowledge comes from films and TV.
Since there are so few films which actually bring geology in an interesting, factually accurate manner there is a strong possibility that people may just see the film and think that it’s based on some real science; That the mantle is home to huge chasms, lava lakes and quartz crystals. When I was younger, I loved Jules Vernes journey to the centre of the earth; even for its factual inaccuracy; even while reading it as a child I knew it was wrong; but that book was one of the reasons I became interested in geology.
Volcano
Combining film makers favourite place to destroy and a generous heaping of inaccuracy volcano is basically about LA getting a little warm under a brand new volcano. The magma supposedly rises up the San Andreas Fault;  which is a little odd as the San Andreas is strike/slip – and doesn’t support magamtism along its length; nearby areas (such as Long Valley) have magmatism, but they are related to normal faulting.  Besides it passes to the 30-40 miles NE of LA.  The lava which slowly engulfs the city also has odd properties; it looks basaltic (given the flow structures and fact it isn’t forming pyroclastic flows) yet cars are covered in what looks like rhyolitic material. Since the film makers couldn’t decide was erupting it is hardly surprising that they couldn’t decide what was melting either; Basaltic magma is usually around 800°C, while granitic magma sits around1200°C -1350°C. Oddly aluminium with a melting point of 660°C appears remarkably resilient; as the lava flows around street lights, traffic poles and all the bits and pieces sitting around in a city.
Given that volcanoes are such a popular ‘popularist’ geology topic to get into it seems curious to have such gapping errors within a fairly successful (and enjoyable film). It displays a lack of understanding into geodynamic processes, petrology and basic physics. The confusion of ‘volcanic eruption so we get ash’ is, alongside one of my pet hates a potentially dangerous problem if any filmgoers experience a more mafic (yet still deadly) eruption they may not recognise the risks (its a bit unlikely but a possibility).

Turning the argument on it’s head is the possibility that the film will introduce people to the geosceinces. The film made $122,823,468; so we can safely assume that quite a few people saw it ($122,823,468/$5 profit per ticket = 24,564,693.6); if even a fraction of those people then developed even a passing interest in the geosciences then that is surely a good thing? While a volcano in LA is unlikely the film may have awoken residents of that city and others to the significant seismic hazards, which exist; promoting education which can save lives – surely that is a beneficial too?
Looking to another volcanic film, Dantes Peak (I haven't seen it so can't go into much detail), which overall looks like Mt St Helens 2 – the events from this film could be used in an educational manner to educate local people to the NW Pacific region into the warning signs (Earthquake) and to what may well happen if they get left behind.  57 people died in the eruption of Mt St Helens in 1980; is it possible that a popular, exciting film may provide the personal knowledge to minimise those deaths?
Day After Tomorrow
‘This movie is to climate science as Frankenstein is to heart transplant surgery.’
William Hyde of Duke University 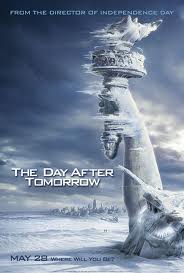 Climate change runs rampant, plunging the world into a new Ice Age. There is no need for a critical review here as I stumbled on this: http://groups.google.com/group/rec.arts.sf.written/msg/6e52157aaf63775f?pli=1 from Paleoclimatologist William Hyde of Duke University; who knows his stuff. It took a little while to load; but is well worth a read – particularly if you have a seen the film,  host a bit of knowledge in ‘climate science’ and utilize a working brain.
Given that knowledge of what man induced cooling is considered to be doing to the planet should be, in my opinion using a popular film to inspire is the transmission of the risks of climate change; which should really be common knowledge  is the way to do it, but it’s like dealing with young children: You give them a inch (climate change will cause global cooling across large areas) and they take a light year (going to happen, will affect New York, massive tsunami and instant frozenness).
What line can science take? It would be foolish to shun all films which feature some form of geological aspect, our science is in many ways lucky to have such exciting processes ongoing and Hollywood has the money to make people excited about the more juicy bits of geosciences (I would love to see a film on Barrovian Metamorphism - 'We're 20km down and its getting hotter; amphibolite is growing!').  However the mistakes made within many a production can lead to an over-sensationist  viewpoint, leading the public wrong with basic geological inaccuracies; which may not be corrected until challenged. The answer, I feel is then to engage with a film and to present the ‘real’ science alongside use the momentum generated by a popular production to get people interested, be it onto a factual website or buried into a book.


Knowledge and interest can only be a good thing.
Posted by Jack at 23:47 No comments: